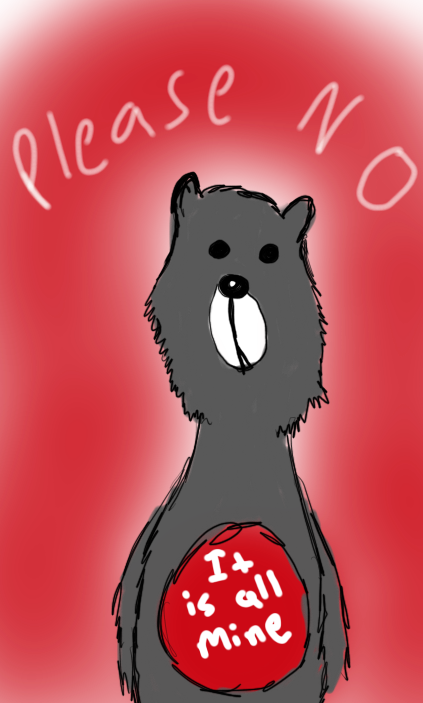 When my belly is shouting at me to tend to it, using pain and anger to fuel my every decision, I cannot help but to eat nearly everything that comes into my sight. I have eaten some strange things, things that did not seem like food until I proved they were food. Crumpled leaves, fish skulls, anthills (including the ants sometimes), the wind (when it cooperates), things caught in the wind, basically everything inside any dumpster ever, sometimes the edges or corners of dumpsters, a bird once (more by accident and it was technically something that was caught in the wind (sorry, bird)). My mouth guides me on these occasions, and I become a furry ball of fury and teeth, claiming all chewable things as my meals.

Then I calm down.

I go off the edge while the hunger infects my very being, and then I fulfill whatever intangible thing causes me to be such a way, and then I calm down. Usually, when I calm down, I can look around, see the leftovers of the dumpster I was in, and move on with what happened. I ate some plastic bags filled with a dark liquid that smelled like burning? That is okay, I will move on. Oh, the tree I climb is missing a limb and my teeth hurt? That is okay, I will move on.

I was not able to move on recently.

Without thinking, I hurled my jaws over the acorns and began to gobble them through my teeth and tongue and spit. In groups of two and three, I would go into the pile and further diminish the acorn reserve.

I ate them all.

When I calmed down, when I ceased to be the monster that I can so easily become, I realized that those acorns were not my acorns. That is probably true of most of the things I eat, of course. The dumpsters are not mine. The wind is not mine. The anthill is not mine. But something about this acorn collection, the way it was gathered so neatly and so beautifully, the way so many leaves and pine needles were so delicately placed and organized, it forced me to know they were not mine.

Someone was saving these acorns.

Someone was probably saving these acorns for when the hunger, the vicious, angry little beast that it can be, would infest their being. And when it happens to them, they will not have the comfort of an acorn reserve to soothe them.

1 thought on “The acorns were not mine.”