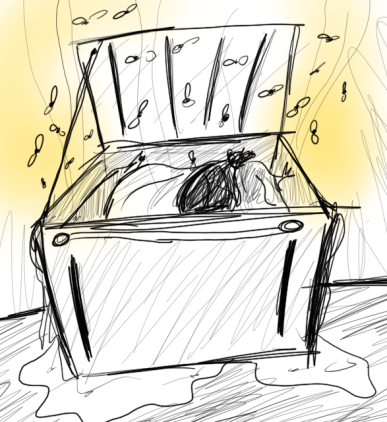 For the most part, there are not a whole lot of things to look forward to when it comes to living in the forest. Many things about forest living are difficult, and most of my time is spent trying to avoid being hungry and/or awake, and I would guess most creatures probably agree with me (unless they are deer since deer enjoy all the needless suffering that goes on all the time). Being in the forest is generally a moment-to-moment sort of existence, and even really thinking about what might happen next can be upsetting since it often does not happen (at least not the positive possibilities).

There is an exception, however. Once in awhile, when the dumpsters are nearly full and the plastic bags within them are beginning to rip apart, there comes a day when all the dumpsters around the forest are accompanied by even more dumpsters, smaller in size and different in shape but just as lovely as their bigger, differently shaped friends. They fill the tiny backspaces that are normally occupied by the dumpsters, and then all around everywhere I go I can see floods of various shaped and sized dumpsters, and it is so incredibly lovely.

The best time to go is at night, of course. You do not have to spend the entire evening searching and hunting for the perfect dumpster diving place, either. There are so many to choose from and they are so filled to the brim with treasures that it is actually easy to get one that you like. The bountiful amount of goods also leads to far fewer instances of raccoon/opossum attacks/hissing fits. There is just so much to go around that no creature even gets too upset when a his/her dumpster gets invaded. That creature just moves on to the next prize.

The only problem with nights like these are the human encounters. Humans, as I have established many times, are strange, loud creatures of the forest that mostly yell when they see you. I have been yelled at by many, many humans, and being yelled at scares me more than almost anything.

But even the human yelling fails to stop nights like these from being so absolutely enjoyable in every way imaginable. I have even caught myself, mid-dumpster diving, trash bag in my mouth, ignoring the shouts of the humans who wanted me to leave the dumpster I was in. I was so hypnotized by the allure of the smells and tastes and wonderfulness of the entire dumpsterscape, that no force, even the harsh, shrill voice of an angry human, could stop me from enjoying myself.

It is one of the few escapes from harsh forest life that is offered, and even though it does not seem to happen nearly as often as it should, I, and you should as well, enjoy every moment of it. It is the one thing to look forward to in the forest.