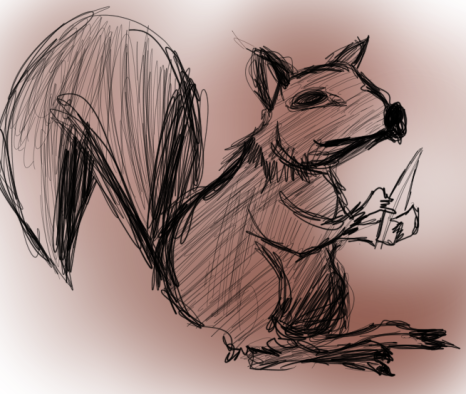 Some say life is full of regret.

Not this bear’s life. My life is full of naps and acorn counting. Surely whatever woodland creature made such a negative utterance has done some terrible things or, at the very least, some things that made him/her feel terrible. While I would never claim to be Saint Bear of the Forest, I do feel that I have lived a good life thus far, and I have no plans on changing that.

It does make me wonder if maybe deep down I am not a good bear at all. Is my lack of regret actually a sign of internal villainy?

Do villains have regret for their villainous actions?

I asked Rob (the squirrel) what he thought, but he merely wrung his hands together and chuckled maniacally. It was a valid answer but not really the one I was looking for.

Rob (the squirrel), who has been known for mild villainy on occasion (mostly to ants and grasshoppers) seemed to be devoid of regret. Did we share the same moral compass? The thought perturbed me. As much as I consider Rob (the squirrel) a good friend, I did not want to be lumped into the same emotional maturity level as he. Surely he felt regret about something.

After some prodding (and light fur licking) Rob (the squirrel) said he regretted many things. He elaborated with the regalement of the time he stole seven sunflower seeds from a mouse family. They were storing them for the winter. Rob (the squirrel) felt so guilty he tried to return the seeds the following day only to discover the mouse family had been ravaged by a hungry Hawk. In the wake of this tragedy, he proceeded to eat the seeds with a clear conscious and never dwelled on the mouse family’s fate again.

I told him I didn’t think that sounded like regret.

Rob (the squirrel) shrugged his little grey shoulders, bit my nose, and scampered up a tree.

Alone, I began to dwell on my past actions. I began to wonder if there was anything I had done for which I wanted forgiveness. Did I require atonement for some past sin?

No. I couldn’t think of anything.

Either I was a sociopath or a saint. Sainthood seemed less likely. There was a third option, however: perhaps I block out every bad thing I do to protect myself from feeling regret and remorse. That was an interesting thought, but I had no memories or evidence to entertain it.

Then, like an acorn being hurled at my head from the top branch of a tree, it hit me: I did have regret that I could recall. At least a little of it.

Last week I found an ant hill ripe for eating. I remember dragging my tongue across their mount, lapping up dozens of little workers with each passing. I stood there for quite some time enjoying the spoils of my discovery.

After I thought I had my fill, I left the ant hill alone and wandered off to take a nap. When I woke up, I was hungry again. I tried to locate what was left of the ant hill, but I could not find it. Perhaps I had licked too much of it. But in reality, I felt like I didn’t eat enough ants. I wished that I had. There: that is regret.

I regret not having eaten more ants.

Suddenly, I felt better. I was comfortable in my own fur again. I had regret. Which was normal.

I wondered if I ate the deer by the river, if I would regret it later.

Probably not. He knows what he did.