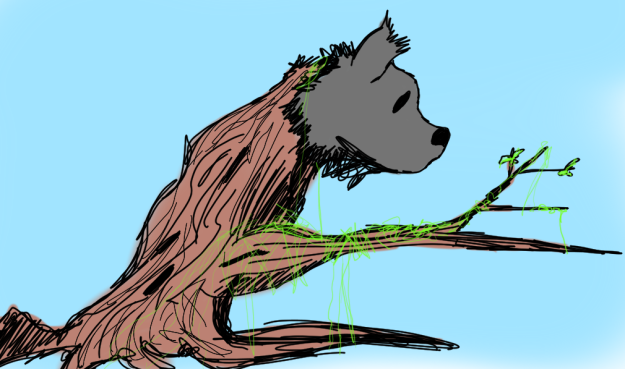 I suppose trying to figure out all of the things that came before bears is a little too grand of a task. After all, it seems like everything is older than bears, especially mold, rocks, and most frogs (their wisdom proves that). I need to narrow down my line of questioning.

What was before bears that led to bears?

I have no idea what was before bears that led to bears. I have some guesses, but that is really all they are: guesses. I do not have any hard evidence like bear bones I dug up or a lovely picture of an old bear.

Bear-trees. That is one of my hypotheses. I think it might be possible trees and bears used to be one thing at one time, a very very long time ago. I feel connected to trees in an inexplicable way. They are so silent and so peaceful and so nice about me chewing on them, collecting their stick children for further chewing, and letting me have the moss on their sides for possible chewing. Trees give. Maybe I am being too self-centered, but sometimes I feel like trees give specifically to me (and presumably all bears). That connection feels ancient. It feels like trees have been giving to bears since before bears were even bears and trees were even trees. So that leads to me thinking that maybe a very, very long time ago we were one thing.

I know this is hard to visualize, but it is very nice to think about. The peaceful, giving life of a tree is something I understand, so it makes sense to me that bears and trees might have once shared lives.

Another guess I have about what was before bears that led to bears is based around another thing that feels ancient and old to me. Dirt. Maybe bears are just fuzzy dirt. Dirt seems like it has been around for everything. Just ask it. Dirt even manages to be more silent and peaceful than trees. I have a myth in my brain that involves dirt realizing it wanted to try being more than dirt by being like all the creatures and non-dirt things that step all over it all the time. In this myth I made up, dirt decides to be a thing that is still rather silent and peaceful but gets to be fuzzy and eat fish. So some of dirt becomes the first bear. That might be me just making up stories, but would it not be so pleasant to consider it true? Maybe everything comes from dirt like that.

Trees and dirt are nice, but I do think those two ideas are more me trying to find commonality in the things I admire about the forest and less about what was actually before bears that led to bears. My practical guess for this situation that I do not truly understand is that all bears came from smaller bears. This line of thinking seems the most reasonable (and boring) to me. As much as I like to believe that I am the product of trees and dirt, I have a feeling that I am actually the product of just some other, smaller bear. A bear that is tiny and helpless and trying to figure out the forest just like I am. A bear that wants to be of trees and dirt and not an even smaller bear. A bear that likes tiny fish in tiny rivers and collects tiny rabbit skeletons. I suppose that is not so awful. It is not as magnificent as dirt and trees, but it is nice to think about a creature that is like me in every way but just tiny.

I will probably never actually know what led to bears, what was before bears, or why I feel more connected to dirt and trees than I do anything else in the forest. I like not knowing, though. It lets my brain wander into things that might or might not be, and who knows if I would be able to do that if I actually knew the answers to all of these questions.

1 thought on “What was before bears?”