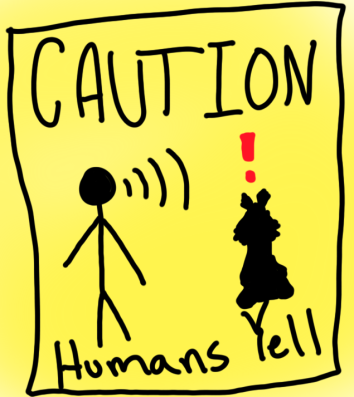 If you spend enough time in the forest, you will eventually come across a human. Humans are by far the strangest creatures in the forest (and I have my doubts as to whether or not they even actually live in the forest). If you do find yourself in front of a human, it is important to know some facts and guidelines about them, their demeanor, and how/when to approach/avoid them.

Before I go into depth about being actually around a human, I will explain some of the things I know (or speculate about) them:

Humans seem very scary upon sight, but it is important to remember that humans are generally just as afraid of you as you are of them. That might seem untrue when you hear the way they yell at you when they find you pawing through their seemingly abandoned tents, but always remember: humans are more loud than they are scary.

So what do you do when you find a human or, more likely, a human finds you? You can remember the steps of engaging humans with the helpful acronym H.U.M.A.N:

How many are there?

Humans are scary, there is no around that, but by using the H.U.M.A.N process (or at least the last step of it), you can avoid being yelled at by them.