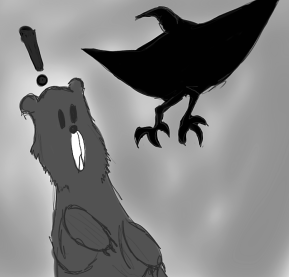 Shadows are an insane mystery in the forest. I know pretty much everything has a shadow, and I know that, generally, that shadow relates to the sun in terms of where it is when you see it, but I have no idea why they are there and what they are planning. For a long time, I was convinced that it was possible to fall inside of them (this came from a misunderstanding I had during a brief encounter with a mole). That is not the case, though. They just make some parts of whatever they are resting upon (the ground, other things, your face) darker for no real reason.

If you pay attention to shadows, though, they can help you manage your awareness of your immediate surroundings. That can be helpful. There have been many times where someone was trying to sneak past me and into my cave to probably take my collection of mold covered rocks, and I caught them because of the elongated shadow that was hurled from them onto the rocky floor. My collection of mold covered rocks owes a lot to shadows. That might be why they exist in general: to help protect my lovely rocks.

Not everyone in the forest uses shadows for good, though. I have, on far too many occasions, accidentally thought the shadow of a bird was something much larger than a bird that was definitely planning on eating me. I do not want to be eaten. Ever. So when I see something that seems like it might want to eat me, I do what any creature probably does when that threat hovers over them: I ran, the whole time staring at the thing that probably wanted to eat me, and crashed into a tree.

Each time this scenario has played out, I have looked all around only to find that a bird in the sky was casting the shadow onto the ground from up high. I know I should have learned my lesson by now, but it is hard to think rationally when you are completely convinced that something is going to eat you.

I do not think it is the same bird, either, as when I have looked up to see the bird playing such a cruel trick against me, it has always been a different color. This has forced me to consider if this is some kind of collaborative ruse crafted by a hateful group of birds. If so, what do they want from me and why do they want it and why can they not find some other way to hurt my feelings other than to make me feel like I am about to be eaten?

I have tried asking a bird, but I have never gotten an answer that did not involve the senseless chirping they are so known for.

For now, when I see a shadow, I have to assume the worst possible scenario: something wants to eat me. If I do not, then something might catch me off guard and actually eat me. Perhaps birds are trying to eat me?

Have birds grown so hostile and bold?

Should I stop making fun of their chirping sounds and accidentally sitting in their nests because they are so comfortable?

Please do not eat me, birds. 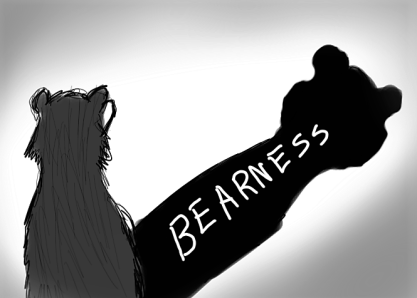 Shadows are a normal part of the forest, but they are still intriguing to study and stare at. I, admittedly, do not completely understand them (which is why I occasionally spend time staring at them). If there is one thing I do understand about shadows, however, it is that they take a long time to do anything (well, the one thing they can do as far as I can tell: move).

Whenever I find myself sitting by a shadow and trying to understand it, I begin to think about what I am really doing as I stare at the mysterious, blackness on the ground: waiting. I am waiting. Of course, I tend do a lot of waiting for all kinds of different activities on a regular basis, but nothing really forces me to actually consider waiting like staring at shadows.

So I think about waiting while I wait for the shadows to reveal their more personal characteristics (which they have not done so far). What do I do when I wait? What does it mean to wait? Why bother waiting? Why not stop waiting and start doing something else that does not involve waiting (leaving, eating, smelling, etc.).

When I wait, I am forced sit alone with my thoughts. That can be a fun thing to do, but it can also be a horrifying thing to do. For every thought that is about licking moss or getting to know a tree, there are just as many thoughts about getting attacked by something larger than myself or deer. It is easy to get lost in thought while waiting. In fact, that seems to be the main thing to do while waiting. I suppose the bad thoughts are important, anyway. After all, getting to know your bearness is just as much about the good thoughts as it is the bad.

That leads me to think that waiting has two crucial functions:

Waiting is a tough thing to convince yourself to enjoy, though. When you are not waiting, you really have no desire to wait. It is really something you do only when you absolutely have to do it, but the more I think about waiting while I wait for something, the more realize that it is a crucial part of being a bear and (likely) being an anything else. Trees seem like they only wait, and they are by far the wisest things in the forest (that is probably because they are perpetually thinking about their treeness, so they understand themselves (and themselves are essentially the everything of the forest) better than any other thing in the forest).

I do not understand shadows. I do not know why they are here and how they got here and whether or not they like me. That is okay, though. They make me wait to try to understand them. And that waiting helps me know me a little better.