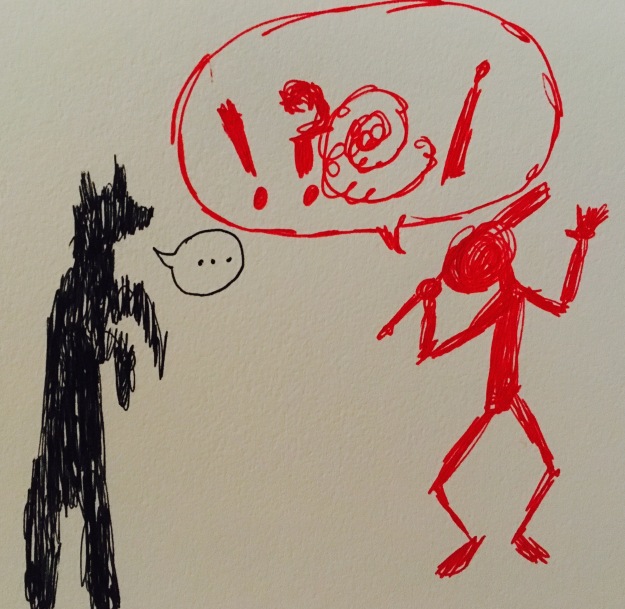 I am very impressed by humans. They live in very strange, cold caves that stick out of the forest floor. Some of them have tiny lakes dedicated to their strange caves. They wear removable fur on top of their regular fur. They have small but, I am guessing, powerful teeth. They create wonderful smells.

Humans are such impressive, strange creatures.

One of the things that most impresses me about humans is how they walk on just two paws instead of four. I need all four of my paws for my balance and composure. If even one paw is removed from its stability, I run the chance of clashing with the ground in a most violent manner. Humans do not have this problem. Humans get to keep two paws up in the air at all times. Sometimes they even use those paws to carry things. If I want to carry something, I have to use my mouth or hope I can balance it within the tufts of my back fur while I walk back to wherever I need to go.

So why would I not try to walk on two paws, too? I have spent a lot of time practicing, all the while dreaming of the myriad of forest treasures I could securely carry with my free paws while after I mastered the ways of bipedalism. These days, I am actually quite good at walking on two paws. I cannot carry anything while I do it (yet), but I can travel several forest paces balancing on just two of my four paws before I need a break or accidentally fall.

I have even become proud of my two-paw walking abilities. So much so that the last time I happened upon a human cave, I decided to demonstrate my balance in front of it. I knew the risks: humans shout, particularly at me. So I knew there was a chance that any human who saw me would just yell at me and chase me with their own two-paw walking. Of course, right in the middle of my show, that happened. A human ran out of the cave and chased me with a large stick. The human shouted at me the entire time, and I ran away on four paws, not two.

Part of me hopes, and maybe even believes, that the human was actually congratulating me on my two-paw skills. Maybe humans communicate everything, even happy things, through shouting. That is probably not true, but I like to believe it.