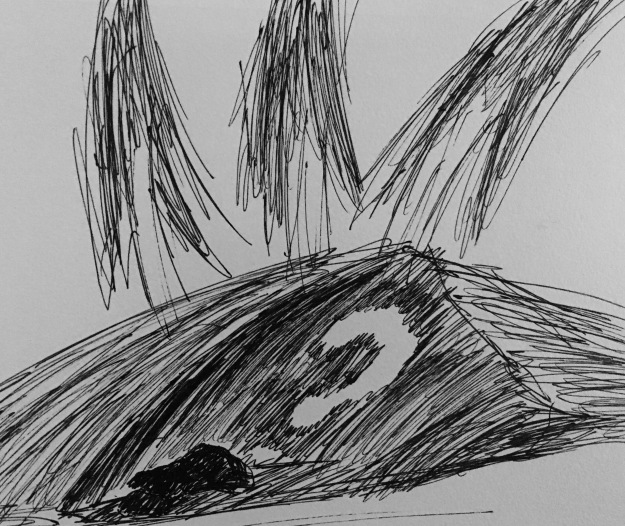 I worry that I hide myself from the greater expanses of the forest too much. I spend a great deal of time in my cave or near the river I like or by the dumpsters I frequent or in the most familiar patches of grass and dirt I know. Rarely do I traverse beyond my known routine, and when I do, it is usually because of an enticing smell or a terrifying sound or an interesting looking rock.

Generally, I am okay with my regular outings, but when I do worry about my routines, I worry about if I am missing out on something. I worry that there are grand, engaging experiences throughout the forest that I miss simply because I am too scared or comfortable to reach them. Experiences missed simply by virtue of proximity (or lack thereof). The forest does not do much to inform me about the possibilities of these events and experiences. There is no master forest schedule that I am aware of (though I have certainly entertained the idea of squirrels having and/or knowing of such a thing and actively hiding it from me for no reason beyond meaningless spite on their part).

When the worry outgrows my desire for comfort and safety, though, I begin to think about how or why I do not search new, exciting things.

And then it all comes back.

Every awful experience I have ever had that happened because of my leaving my routine.

The time I got locked in a dumpster and then some humans sprayed stinging mist at me and tipped the dumpster over so I rolled out? That happened because I tried a new dumpster, one I had never been to but had an incredibly smell to it I wanted to investigate. Blinded by the awful mist, I ran through the forest wildly until I eventually hit a tree and napped until the sun was up.

Or how about the time I tried to enjoy the offerings of a human lake? The water ended up burning my eyes, and the humans who lived near the lake sprayed more awful mist at me (you can guess what I did afterward).

Then there is the long, flat black rock. I have followed it far beyond my cave before to end up finding nothing new or of interest. Just more forest and smashed raccoons. A sad, difficult rock that seems to exist only to crush unsuspecting forest creatures. It was a sight I could have lived without experiencing.

There have been good times found far and beyond my cave, though. I once found a very cool and fish abundant part of the river I go to. I followed it upstream until I was able to see more fish through the water than I had ever seen. I jumped in. The water so cooler than I had ever remembered the river being. The fish were so plentiful that even my slow, uncoordinated paws were able to catch them. It was nice. And I would not have experienced it without going outside of my comfortable routine. Are the plentiful fish worth the potential of stinging mist, though? I do not know, but for now, I suppose I will go where my bearness leads me, whether it be the comfort of my cave or some new, terrifying adventure.