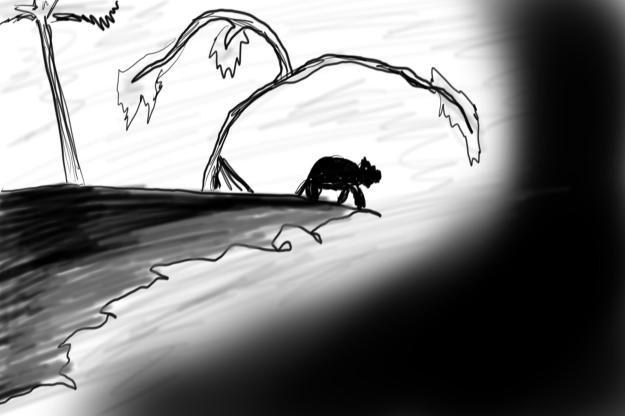 I have not seen another bear in a long time, and my total bear sightings is really quite small (unless you count times I have seen myself (which actually sometimes leads to me thinking I am seeing another bear (which is scary))). Of course, the most likely of scenarios is that the forest is much much larger than I could ever even fathom, so the bears are out there just not around me.

What if I am the last bear?

The thought has kept me restless many a night in my cave. I stare at the black, pointy wall of my cave and wonder how similar it must be to the future of bearness and bears in general… Bleak and… pointy. I am not sure what that could mean, but it scares me.

Even though I am just one, single bear, I often feel like I have more to contribute to the forest in general. Surely there is forest or bear wisdom I can pass down to other bears or even other creatures of the forest. How will anyone ever learn my perfected technique of rubbing my fur in leaves until it is has the balanced amount of fuzziness? Surely someone in the forest, especially a younger bear, could benefit from such knowledge. If I were to perish (probably by deer) without sharing this knowledge, and I am truly the last bear, what would happen to that information? Where would it go? Would it venture off to wherever I would go? Would it fill the empty space between the trees in the forest, waiting to be learned by some willing and interested creature? Would it just stop being?

If I am the last bear, then is there even a point to my personal continued bearness? Do I even need to be a bear if my legacy of being a bear stops with me? I like being a bear (though I do not have any basis of comparison, to be honest), but something about being the final bear of all bears upsets me. It makes me wonder if I am what all bears before me were leading up to or if those bears before me even cared. Maybe they all thought they were the last bears at some point. Maybe they just kept being bears because that was what they knew how to do. To be bears.

I am sure it is just some strange anxiety that is coiled at the base of my bear head somewhere that keeps this idea alive. The chances of me being the final bear seem low. There have to be more bears out there. I am sure. Maybe.