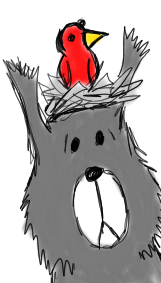 I do not generally wear hats for one very important reason: I am a bear, and I do not know if bears are supposed to wear hats.

That does not mean I have never tried to wear a hat. I once found a very lovely hat in an abandoned tent. It was red and soft, but I did not know what to do with it at first. I ate it, which, as it turns out, is not what you are supposed to do with hats.

Rob (the squirrel) later explained to me that hats are what humans wear on their heads because they do not have enough fur to keep warm all of the time like most forest animals. He laughed at me for eating it and called me a fool.

It was not nice, but I appreciated the information. I vowed that if I ever found a hat again, I would try to wear on my head so I could have a human experience.

When I finally found a hat again, it was in a dumpster and it was plastic. I put the hat on my head, but it did little in keeping me warm or being comfortable or not making it hard to get air into my body. From then on, I merely assumed hats were not for bears. It made sense, after all, as I already had enough fur on my head to keep me warm.

After living and accepting my hatless existence for a very long time, I eventually began to wonder if maybe my hat experience was just a bad hat experience. Should I give hat wearing another try? Even if my head is already warm, would it not be nice for it to be even warmer? Maybe the plastic hat I found was not actually a hat and was more of a bag, actually, in retrospect, I am pretty sure that was the case?

I wanted a warm head like humans must get to experience on a daily basis (I imagine all humans wear hats all the time (why would you not want a warm head forever?)).

The chances of me finding another hat were slim, unfortunately. So I had to consider alternatives to hats.

I tried rocks, but they were far too hard and difficult to balance on my head. They also scratched my scalp a little too much.

The hat of leaves I made was nice, but it fell apart as soon as it rained, and it had far too many bugs in it for it to be comfortable while I was sleeping.

I tried accepting the cave above my head as a kind of hat, but since it did not actually touch my head, I had a hard time justifying that theory.

That is when I got an idea: why not put something I know is warm on my head? Most forest creatures are warm, so why not see if one could be my hat?

The idea was almost forgotten as soon as I remembered the time I let a opossum sleep on my head one cold, winter day. I woke up with very angry wounds near my eyes.

For some reason, my thoughts went straight to birds. Birds like to be perched in things, and why would you choose to perch in a tree when you could perch in warm bear fur?

I asked a bird who liked to make sounds outside of my cave every morning if it would be interested in nesting in my head fur, effectively becoming my hat. The bird agreed.

It was pleasant at first. The bird built a nest of sticks in my fur and made a cozy little home. It was sometimes difficult to keep on my head, but I managed to keep it secure while I walked around the forest.

The real problems began when the bird would fly away to do bird things, and I would end up just balancing some sticks on my head until the bird was back. And though it was nice when the eggs hatched, I knew this relationship could not last long.

I told the bird it could not longer be my hat. It was difficult to break the news to her, but she took it well and even let me keep the nest she had built (I did not actually want it, but I kept it to be nice).

Hats are not for me. People hats. Bird hats. Plastic bag hats. I am not meant to wear hats. I have to accept the furriness and warmth of my head as it is and move on.

Thank you, though, bird.

1 thought on “Birds as hats: a failed experiment.”