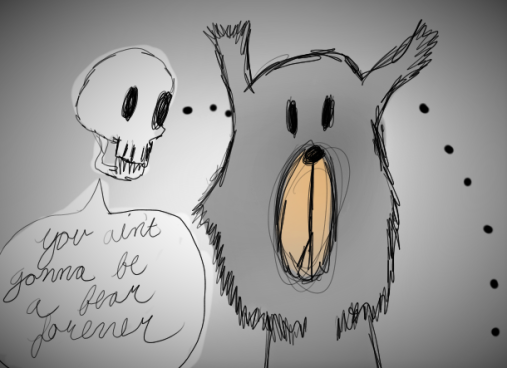 I have never heard of anyone successfully finding an ending to forest living other than the one detailed with my ant experience. That does not mean there is not another way out of forest living. Perhaps achieving it means being taken away from the forest, thus it would be difficult for anyone who has experienced it to communicate its existence to anyone who has not experienced it. Maybe there is a particular set of actions and mindsets that will help you not end up being the bird carcass I found inside my cave the other day. Maybe you can end up not nonexisting. Maybe you can keep being the thing you like being forever and ever no matter what.

I do not know.

But I cannot help but to obsess over the possibility when I think about not being a bear (or an anything else for that matter). It is terrifying. I want to keep being a bear, and it seems strange to me that eventually, no matter what, I have to not be a bear.

Why do I have to not be a bear eventually? Why was I designed to be a bear so well for so long, only to have it eventually taken from me for no reason that I can figure out?

Why be a bear only to eventually not be a bear?

The most frustrating part about these questions is how useless everyone and everything seems to be when it comes to answering them. Trees? Nothing in regard to these questions. Squirrels? They seem unable to think beyond a few seconds ago and a few seconds from now. The sky? Well, the sky never says anything, so that is silly to even consider. For awhile I figured rocks might know (the depth of their wisdom is only matched by the hardness of their being and their effectiveness in chipping my teeth when I chew on them), but if they do, they are not sharing the answers.

It would be nice to at least have some kind of encouragement when these matters, some kind of reassurance that not everything about existing beyond right here and now is so daunting and terrifying. Nothing provides that, though. And, in fact, the forest is littered with clues to point to the opposite. Everything that stops being a thing in the forest does not get to do so gracefully. In fact, most things are just eaten or simply rot away (I cannot fault the forest too much for this, after all, since I do a lot of said eating).

So how can I win at living in the forest? What can I do to keep being a bear and not face not being a bear? What does the forest want from me in return?

Or do I need to just accept that I might not be a bear one day?

2 thoughts on “Why do I have to not be a bear eventually?”