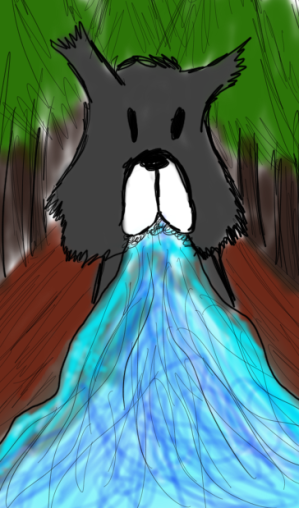 The river I go to in the forest is a great mystery. I know a few things about it. It provides delicious water for me to drink. It has lovely, shiny pebbles at the bed of it. The river also delivers fish for me to stare at or eat or consider the lives of. I can swim in the river. I can sit in the river. I stare at what I presume is my face in the river. The deer rests by it, too, which I am not fond of, but I understand why he chooses to do so (beyond to taunt me).

I know these things about the river.

What I do not know, however, is where it comes from or where it ends up. It seems to move forever in both directions, so in the past, I have been far too intimidated to explore the river. Where would I start? Toward where the water goes or toward where it comes from? Do I want to know how it begins or how it ends? Should I just float in it and see where it takes me? Should I trek to the side of it, against where the water flows?

There were too many things to consider, so I never bothered to actually create a plan for exploration until very recently. When I did finally decide to explore, I was set on finding out where the river begins. I made this decision based off a theory I had developed involving a river bear at the mouth of the river. What if there is a bear at the end of the river from whom all the glorious water seeped? Imagine it. A massive bear with its mouth wide open, pouring rushing water to provide for the numerous creatures of the forest who depended on it.

My theory was based completely off a dream I had after taking a nap in a dumpster where I ate three wet pizza boxes, but I felt absolutely compelled to explore it and find out if it could be true. Even if it was not, just knowing what was at the beginning of the river would be satisfying enough to validate the trip.

At first, I swam in the river, toward the flowing water. It was difficult but very fun. I also got a lot of water in my mouth and ears and eyes. That was less fun.

The journey continued on land. I stepped out of the river and walked beside the stream of water instead.

It was very boring.

Before long, the sun had left and the moon had come and I was sleepy.

When I woke up, I was in the river (I am not sure how this happened), and I had floated all the way back to where I had started. I was startled to find the deer across the river staring at me, surely thinking of ways to end my life. I made a growl of discontent and got out of the river. Then, I went home.

In my cave, I napped again. I was hoping to dream about the river bear again, but I did not. Instead, I dreamed about floating down the river forever, enjoying the peace and soothing sounds of the water as I accepted not knowing anything about everything. Also, I am pretty sure the deer was the one who pushed me into the river while I was napping (I have no proof, but I feel this is accurate).

I woke up and ate some moss in my cave.

It was nice, and though I wish I could have met the river bear or at least found out if it existed, I was okay with where I ended up.