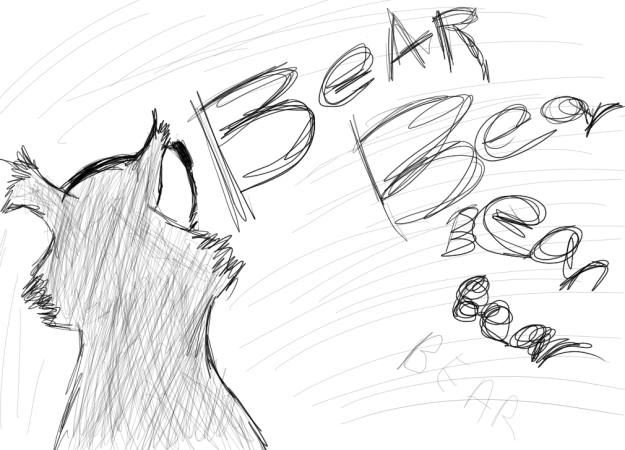 Am I too much bear? Does my bearness have a maximum capacity that I sometimes overflow with fuzziness and sniffing dirt and eating acorns and rolling in grass (you know, bear things)? It is hard to say. I often feel that I am exactly the right amount of bear. While my weight seems to fluctuate according to sticks I like to step on, perhaps measurements of bearness cannot be collected in common physical data. Maybe bearness is something intangible. A feeling you can’t put your paw on.

I took to surveying some fellow forest dwellers to get their input on my bearness. The results were mixed, as one would expect.

‘You are a bear…I suppose a bear of an acceptable size. Does that answer your question? No? Then I don’t know what to tell you. I’m going back to digging. Sorry I couldn’t help.’

Rob (the squirrel) replied with that strange barking sounds squirrels make and scurrying up a tree. Then he threw an acorn at me, but I dodged it. This seemed to frustrate him so he ran away. I am still trying to interpret this answer.

‘If I tell you, I will need a favor in return. You have to promise. I’ll give you all the info you want regarding your own bearness, but there is something you much help me with. Agreed? Good. Shake on it…’

Apparently my bearness was too much for the rabbit. He stopped talking (and moving) after our pawshake. I even waited for a long time for him to say or do anything again. Nothing. I suppose I bored him.

‘I’d love to answer your existential question but I’m in quite some rush. A friend, and I use the term “friend” loosely, stole a rather impressive gathering of apples I had amassed in my burrow and hid them from me.’

‘Sure I can tell you what he looked like. He looked like me. Long ears, furry tail, etc. Seen him? No? Okay, well if you do, you come find me. Thanks.’

I probably should not have asked my question while the opossum was in a dumpster.

I probably should not have asked my question while the raccoon was in a dumpster.

Unfortunately, the dumpster did not have a verbal or physical response. It was actually a nice change of pace compared to the hissing.

The sky, too, did not have an understandable response, but I did hear my echo in the vastness of its everything above. As my words bounced off the sky and spread as far my ears could hear, all throughout the forest, I realized that the degree of my bearness is actually irrelevant compared to just about everything else in the forest. This is why I received few revealing responses. Nobody is worried about me being a bear or how much of a bear I am. Only I am worried about such things. Only I care about my bearness. It is a little sad to realize how small I am even when compared to the daily thoughts and opinions of (physically much smaller) woodland creatures. I suppose my self-important questioning deserved the hisses it mostly received. I want my being a bear to mean something, to be important on some grand forest scale, but it just is not.

It is a relief, too, though. There is no huge role to fulfill or some grand journey to pursue. I am just a bear. There is not much more to the idea than that.