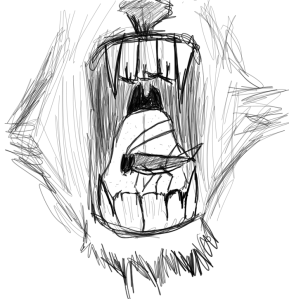 I do not know how I look when I fall asleep. I like to believe that my pristine fur calmly rests against the cool rock floor of my cave while my heavy, slow breathing gently vibrates through the forest’s night air. According to Rob (the squirrel), who has watched me sleep many times for reasons he will not explain to me, my entire body twitches as I rustle around on the ground, tossing and turning throughout the night and making sounds that are somewhere between growls and desperate gasps for air. Regardless as to which one is true, I would think it must be difficult for any creature to find a reliable place for repose near me while I sleep.

I recently woke up to find something sleeping in my mouth. At first, I was unable to determine what the lumpy, salty mystery in my mouth was. I was tempted to just eat it (as I do with most lumpy, salty mysteries I find in or out of my mouth), but something told me to stay my jaws and wait. After a long morning of an open, dry jaw, I finally felt the tiny intrusion slip from my face. After shutting my mouth to let a torrent of soothing saliva rescue my tongue, I sniffed the ground below me.

What I found was a small cricket.

Perhaps small is not the right way to describe it (I have no idea if this cricket was small by cricket standards, but I do know that all crickets are small compared to me, trees, the sky, and even most mice). It was definitely a cricket, however small or big it might have been. It made a lovely chirping sound at me and then hopped away before I could ask any questions.

I did not put much more thought into the situation for the rest of the day. I was glad I had not accidentally eaten the cricket, but I also found its intrusion to be a tad bit inconvenient and somewhat unsettling.

Day came. I woke up.

The cricket was in my mouth again.

I did not wait all morning to see if it would simply jump out this time. Instead, my tongue was its alarm clock as I pushed the cricket out of my mouth. It seemed startled, it chirped at me, and then it went on its way.

I must have made my point. The cricket never slept in my mouth again. I, at first, felt no remorse for my actions against the cricket. It was okay to sleep in my cave, I told myself, but I found it difficult to abide one sleeping inside my mouth without my explicit permission.

As the thought lingered in my mind, however, I contemplated how I sleep. I have never once asked my cave (and is not audacious for me to claim it my cave?) if I could sleep inside of it. I have napped on top of many things without explicit permission: dumpsters, abandoned campsites, piles of leaves, moss, a family of opossums (only once and by complete accident and nobody was permanently injured), on tree branches, and even under the sky.

I have never asked any of these things if I could have the privilege of using their personal vessels as my personal bed. And many of these things (except for the opossums anyway) tower in size compared to me as I did the cricket. I felt no need to ask something so massive for permission to rest on or under or inside of it, so why would the cricket feel it had to do the same with me?

I began to regret my hasty actions against the cricket, and I even considered how easy it could be for me to experience the cricket’s plight. After all, what could stop the cave in which I sleep from one day choosing to spit me out as I had done to the cricket?

Should the cave do so, I would be forced to leave.

The night of the same day I forced the cricket from my mouth, I went to sleep with my mouth open. Intentionally. I was awake for quite some time, waiting and hoping the cricket would show up and rest where it once must have felt so comfortable.