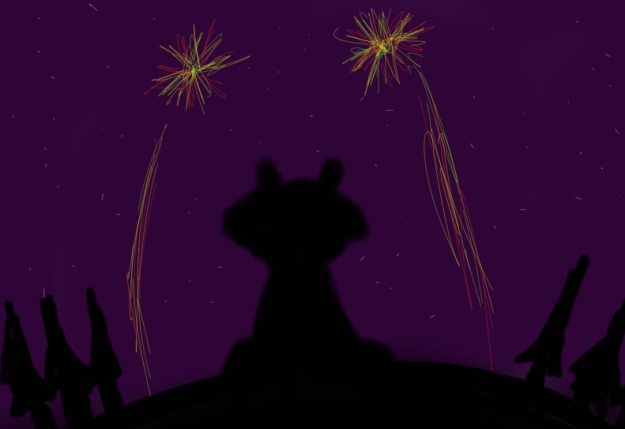 Just the other day, the night sky was screaming in color over its own black emptiness. It was extremely alarming at first. I was sitting in my cave, rolling the rib of a rabbit skeleton on the ground as I waited for sleep, when, very abruptly, a loud crashing sound echoed through the night sky and bounced off the walls of my empty cave.

I ran outside to check what could cause such a disturbance. My first guess was thunder, a sound with which I am familiar but still keeps me awake when it is being particularly cranky. But this sound was a little different from thunder. It was more continuous. More abrupt. More colorful.

When I got outside, the popping and crashing sounds came again. More this time, too. I looked up. The sky was filled with amazing colors that are not very common in the forest. The only things that come close to these colors in the forest are reptiles in various stages of anxiety, grief, or happiness. The sounds and the colors kept coming. Straight lines of white and gold zipped into the air. Each would then burst into a cloud of smoke and sharp looking color. It was hypnotizing. It was also terrifying. Unnatural yet oddly appropriate.

The first time I remember hearing and seeing them is a distant memory at this point. I remember that my cave was still new to me. I had just recently found it (it came with several piles of lovely moss and a mouse who eventually died one winter later). I was trying my best to be comfortable in my new habitat when the violent sounds ripped through the sky. I was so terrified that I decided to put my paws over my ears and wait for the sounds to go away. After a long while, however, I realized they were going to keep going. I decided to investigate. The colors were so foreign to me then (just as they are now, frankly). I stared all night. They eventually died down, but I stayed outside of my cave until the sun rose. For a brief moment, I was hoping that the sun, too, would shout some violent colors in the sky. It did not. It made its usual warm, glowing color and sounds.

I still have no idea what causes these strange lights and sounds. I wish I did. I wish I understood their purpose and place in the forest. Maybe one day I will go following them. I will follow the sounds and the sights. I will try to locate exactly from where they are coming. I will make a discovery and expand my understanding of something strange to me.

Or maybe I will just let them continue being a mystery. A mystery which I will take pleasure in knowing that I will never really know anything about it.