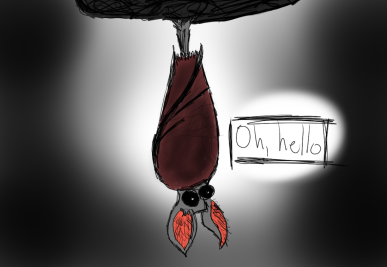 I had never met a bat before the bat that I met in my cave who flew into my fur.

I did not know anything about bats, but I had seen them from time to time while going through the forest, searching for neat rocks and licking clumps of moss. For a very long time, I thought they were birds, but when I saw one hanging upside down from a tree one night, I realized that only a very strange or sick bird might do something like that.

I have never really had an interest in meeting one, to be perfectly honest. It was never out of hatred or fear of what bats are or could be, I just did not know enough about them to know how to approach them, so I figured it was best to stay away from them.

If that seems thoughtless, that is because it was. I did not put much thought into how my potential interactions with any/all bats from now until I am no longer able to have interactions with bats. That carelessness comes from how infrequently I even see them. Bats are very rare from my observations, so I never had a way to gain an interest in meeting one.

That was until a bat flew at me and into my fur. Recently, I was spending a lovely evening in my cave, resting my chin on a sharp rock because my chin had itched and the rock was able to scratch it. It was a very nice way to spend my night, and I really figured that my chin-rock-scratching was going to be the last thing I did that night. Right when I felt my chin had been scratched enough, I heard a strange squeaking sound followed by what sounded like frantic flapping. The sounds got louder and louder and then my fur felt unsettled, rattled. When I turned my head toward the place of distraction, I was startled to find the close-up face of a tiny bat.

We let the moment linger.

And then I jumped and ran and whimpered as I scooted in circles around my cave floor, trying to convince myself that my fur was fine and on longer invaded by some flying creature of the night.

I eventually settled down, and when I looked up, I could see the bat hanging from the top of my cave, bathed in moonlight and my own fear.

I tried going to sleep once I realized that was what the bat was most likely doing. So I nestled my head under my paws and got some rest.

When I woke up, the bat was gone.

3 thoughts on “The bat I met might want to be friends.”